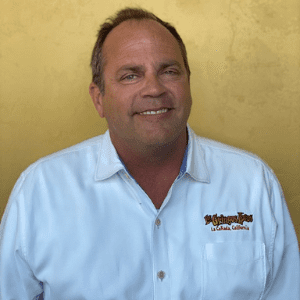 After graduating college, Bent Hansen had no idea what he wanted to do with his life. But having grown up working in the family restaurant, the industry was in his blood. So, when he came across a small, local restaurant at auction, he had his answer and Los Gringos Locos was born.

Bent’s early years as a Restaurant Owner were hard. He learned that just having great food and service wasn’t enough. He worked long days, barely stayed afloat, bounced checks, and often wasn’t sure if he would make payroll. He would tell himself, “I’m ALMOST making a profit” or “it’s getting better”, “just a LITTLE longer”. It was depressing, and he was ashamed in front of family and friends. Despite trying virtually every type of advertising available, he struggled to grow sales.

He knew there HAD to be a better way. He realized he couldn’t build the life he dreamed of by working “in” his restaurant. He had to work “on” it and figure out how to grow sales and profits. So, he dove in and became a student of marketing. After plenty of expensive and painful lessons, he found a system that put him in control of generating customer traffic, even during slow periods.

The results? It wasn’t easy, but over time he went from barely being able to pay his bills to being able to spend more time doing the things he loved, including more time off with his family and friends. He had built his sales to $2.9 Million. He’d arrived! Then Covid hit, sales plummeted, the doors closed, and, like every Restaurant Owner, he wondered how he was going to survive.

Since then, Bent has marketed aggressively, reorganized his restaurant, and found creative ways to find and retain staff. Where is he now? Although he never thought it possible, he has built back stronger and has exceeded his sales records before Covid. The systems he has in place have built his sales to $3.2 Million.

These systems have earned him BIRA’s highest accolade, Restaurant Owner of The Year. His ability to transform, grow sales, and consistently bring customers back again and again is second to none. When asked to speak at the Independent Restaurants Roadshow and share how he pulled his restaurant through the Covid-19 crisis and built higher sales and profit than ever before, Bent quickly agreed. He is eager to share his systems with other Independent Restaurant Owners so they can put them to use in their own restaurants, because there are still plenty of challenges that restaurateurs still face. Consumer habits and expectations have changed, and many are struggling to stay afloat in this new economy.

What You’ll Learn at This FREE Live Event:

Being an Independent Restaurant Owner can be a lonely road. BIRA has created this FREE, intensive half-day LIVE event to support Independent Restaurants grow and maintain sales and profits. Join us and learn exactly what Bent has done to build a restaurant that supports the life he’s always dreamed of, so you can go home and do the same.

Meet Bent LIVE In Denver And Learn How He Rebuilt His Sales To $3.2 Million!